July 26, 2019. Statement by Tower Genius LLC, regarding T-Mobile Sprint merger. The Wall Street Journal and other media sources have reported today that the US Justice Department approved the merger between T-Mobile and Sprint.

Kevin Donohue, a Managing Partner at Tower Genius weighed in on the matter, "this is good for the executives at Sprint and T-Mobile, as well as the fat cats on Wall Street who brokered this merger, but it is a complete disaster for fostering competition in the wireless industry." He went on to say, "if anybody wants clear proof that this deal will stifle competition, all they need to do is look at the news stories regarding the delays of the merger being caused by T-Mobile and Deutsche Telekom trying to limit DISH's ability to sell their telecom assets or merge with major technology companies such as Google. We're extremely happy that the various states opposing the merger are still pursuing litigation to overturn this decision, and that there were better paths to financial stability and being more competitive if Sprint and T-Mobile remained separate and instead pursued partnering with major tech firms who are cash heavy and work with them to provide innovation, so they could complete with Verizon and AT&T." 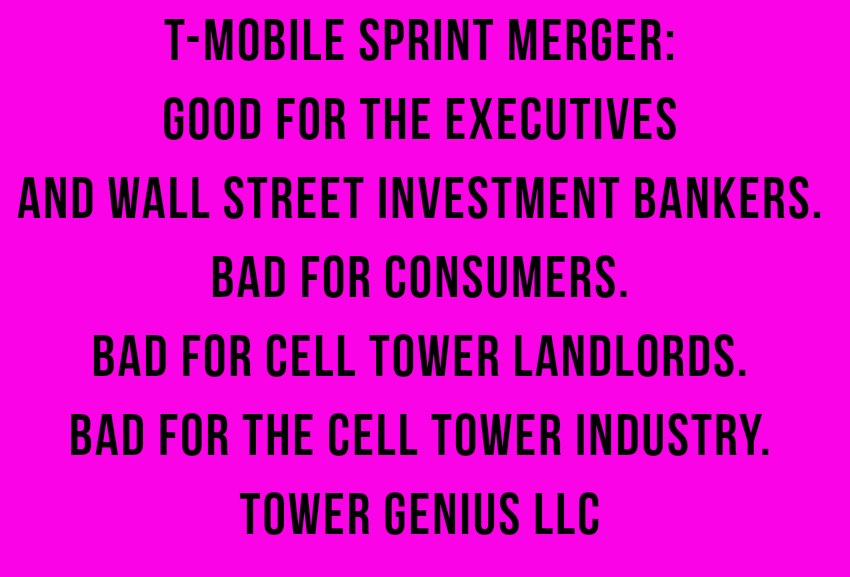 Media has reported today of a planned $26 Billion merger between wireless carriers T-Mobile and Sprint. Tower Genius LLC’s position is that a T-Mobile Sprint merger is bad for consumers, bad for the various segments of the wireless industry, and it is especially bad for the various small independent cell tower and cell site landlords who will lose rental revenues due to the consolidation of T-Mobile and Sprint cell sites. The attempts to merge these carriers should be rejected by the federal government, as they rejected the previous attempt by T-Mobile to merge with rival AT&T.

While carriers when looking to merge will always point to the fact that cellular usage costs have continually dropped even during periods after other carrier mergers were allowed, those drops were not caused by any synergy created by the mergers themselves, they were caused by normal dynamics and competition in the market.

A Possible T-Mobile Sprint Merger Would Be Very Bad. Here's Why.

When the original licenses were given out for PCS geographical areas, the intention was to stimulate competition as the landscape of wireless telecommunications in the United States. The market was dominated by three companies, the Regional Bell Operating Companies (which mostly became Verizon Wireless), Cellular One (purchased by AT&T) and Nextel (which was absorbed by Sprint), to allow the U.S. telecommunications market to be more competitive, not only from a price standpoint for consumers, but to foster technological advancements, and for the more efficient expansion of system networks. Now this Sprint T-Mobile merger would reduce competition, give consumers less choice, and set the industry back to the time where it will once again be dominated by three major companies.

In our opinion, many of the past mergers should not have been allowed, and this merger stands to damage the competitive nature of the wireless industry in a far greater manner, than the few benefits obtained by the owners of T-Mobile and Sprint, and Wall Street investment bankers, who will walk away from a merger with the greatest benefit.

The main problems that have hampered T-Mobile and Sprint’s ability to compete with AT&T and Verizon Wireless, is that their foreign owners (SoftBank and Deutsche Telekom) have been unwilling to make the financial commitment to network expansion. The logical course for federal government regulators would be to reject any proposed merger between these firms, and to foster an environment and reduce any barriers pertaining to investment by cash heavy American technical companies such as Apple, Alphabet, Microsoft, etc.. The technical expertise of Sprint and T-Mobile mixed with the advanced software and hardware platforms and cash potentially provided by such American tech firms could provide a great challenge to Verizon Wireless and AT&T. The potential windfall for consumers due to the expanded cellular networks, continued competition and further incentive for various technical platforms to merge could be explosive for the economy and increase employment opportunities in this industry sector, as opposed to the thousands of jobs that will be lost and the huge measure of reduced competition of such a merger was to be approved.

The proposed T-Mobile Sprint merger is bad idea, and it is the the opinion of Tower Genius LLC is that it will not be approved.